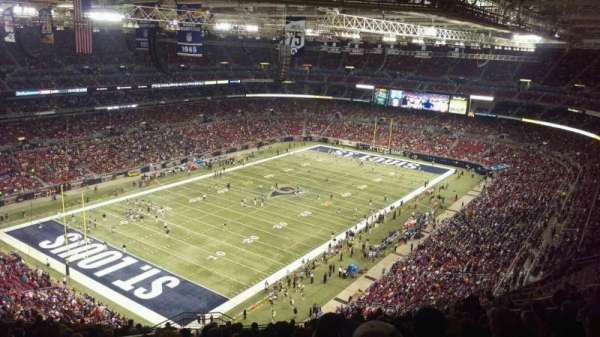 The Dome at America’s Center, aka “The Dome” to locals, is a multi-purpose stadium. It is used for events, major conventions, and sporting events in Downtown St. Louis, Missouri. The stadium was previously known as the Trans World Dome from 1995 to 2001, and then as the Edward Jones Dome from 2002 to 2016. This arena was initially constructed largely to lure an NFL team back to St. Louis and to serve as a convention space.

The Dome is part of America’s Center convention center. The convention portion has a much bigger footprint compared to the stadium. It adjoins to the west of the Dome, Cole Street to the north, Broadway to the east and Convention Plaza to the south.

During its planning and construction, the Dome was named The Dome at America’s Center. In 1995, Trans World Airlines (TWA), a St. Louis-based air carrier, purchased naming rights and held them until 2001. During this time, the Dome was known as the Trans World Dome. The Airline was acquired by American Airlines (AA) in 2001. Since AA already has its name on two NBA/NHL venues in Dallas and Miami, they did not renew the naming rights agreement with The Dome.

The facility then briefly reverted to The Dome at America’s Center until the naming rights were acquired on January 25, 2002, by Edward Jones Investments, a financial services firm based St. Louis.

The Dome’s first main tenant was from NFL’s Los Angeles Rams, who relocated to St. Louis for the 1995 NFL season. The Rams spent the next twenty-one seasons in the Dome, departing after the 2015 NFL season.

The Dome was met with many issues throughout the years and they are mainly centered on a lease signed by the Rams. For the first decade, the Dome was considered a fine facility. As time went by, the Rams and city leaders became concerned with the Dome’s long-term viability.

Under the terms of the lease that the Rams signed in 1995, the Dome was required to be ranked in the top quartile of NFL stadiums all through 2015. This meant the Dome had to have the proper fan amenities and other not just by maintenance but also upgrades to keep up with modern NFL stadiums. The agreement states that if the arena was not ranked in the top quartile, the Rams were free to break the lease. Additionally, they can either relocate without penalty or continue to lease the Dome on a year-to-year basis.

In 2005, the rankings indicated that the dome was no longer in the top quartile as mandated by the lease. This gave the Rams the right to begin the process of breaking the lease or reverting to a year-to-year. The Rams provided St. Louis ample opportunity to meet the quartile requirement. Instead of breaking the lease, The Rams agreed to waive this right for the 2005 checkpoint in return for $30 million of renovations and improvements. By then, both the Rams and city leaders realized in a long-term, the Dome needed a major overhaul or St. Louis would most likely risk losing the Rams after 2015.

After years of negotiations, The Dome received a $30 million renovation in 2009. The funding was given for renovation works and improve amenities. They replaced the scoreboards with LED video displays (one large in the north end zone and one smaller in south end zone) and LED fascia boards around the bowl of the Dome. New premium areas, Bud Light Zone and Clarkson Jewelers Club, were added too. Some of the paintwork in the Dome was lightened as well and re-painted in Rams colors (Blue, Gold, and White).

Where else, the Rams locker room was re-built and switched ends from the north end zone to the south end zone in 2010. Before the 2010 season, the Dome also received a new permanent turf surface. The surface was AstroTurf’s Magic Carpet II Conversion System, which features its GameDay 3D Synthetic Turf System. This system is similar to the original turf system that was in the Dome from 1995 to 2004 but this new surface can be rolled up and stored underground in a pit at the Dome. Additionally, in 2011, new HD monitors were installed throughout the Dome to replace the older screens at concession stands and other areas.

Unfortunately, the Dome’s poor reception with NFL fans and the general public as the years past did not help with the situation. Despite efforts made in the 2010 renovations, many websites ranking NFL stadiums listed the Dome near the bottom of their respective rankings out of 31 stadiums. In 2008, for a Sports Illustrated poll, St. Louis fans ranked it the worst out of any NFL stadium at the time. This was due to its particularly low marks for tailgating, affordability, and atmosphere. Later in May 2002, Time magazine ranked the Dome as the 7th worst major sports stadium in the United States.

January 4, 2016, marks the date that The Rams formally filed their request to leave St. Louis for Los Angeles. On January 12, the NFL approved the Rams’ request for relocation to Los Angeles for the 2016 NFL season. Once the team left, Missouri taxpayers shouldered the remaining $144 million in debt and maintenance costs on the stadium. The debt is expected to be paid off in 2021. Since then as well, the Dome has mainly been used for concerts and events overflow from America’s Center, including the September 18, 2018, St. Louis stop for Taylor Swift’s Reputation Stadium Tour.

Additionally, the Dome at America’s Center has hosted numerous major conventions, trade shows, and exhibitions as well as events as varied as rock events, motocross races, and monster truck rallies. In 1999, The Dome at America’s Center hosted a Mass celebrated by Pope John Paul II. The event was the largest indoor gathering ever held in the U.S. Other than that, The Dome has also played host to a number of large-scale amateur and professional sporting events, including the 2005 NCAA® Men’s Final Four®.

A piece of good news that was released stated that at the beginning of Spring 2020, The Dome will serve as the home stadium for St. Louis’ (XFL) football team.

For further information on The Dome at America’s Center please read the following pages:

The Dome Parking:
Read all available parking options at the The Dome.

Ticket Policies:
Find out more about our ticket guarantee and other ticket policies.

The Dome Seating Chart:
View the main seating configuration for the The Dome events and find out more about accessible seating.